Know how to start a Monday off right? Oversleep. Slept right through the alarm (or hit snooze in my sleep), and was awakened by the dogs barking 15 min after I should have been at work. Fun times.

I finally finished the VIRTUAL RIDE for breast cancer hosted by Run with Jess this weekend. 31 miles of during October, and a lot of butt pain. lol I did manage to take a picture while I was riding during my second ride (the 12.5 mile one): 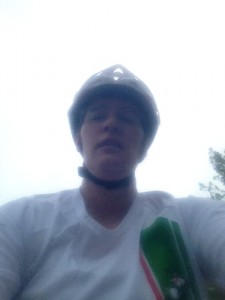 Less than 4 miles into and I was already in pain. And I’m pretty sure I was even rolling downhill when I snapped it.

I rode 11 miles on Saturday, and that was all I could do. That left me 4.1 miles to finish yesterday, and as soon as I sat down on that seat I knew that was going to be a long 4.1 miles with a sore butt. But, after about a mile, my butt didn’t hurt so bad. Probably because my legs started to hurt worse. haha After it was over, I had the hubby snap a shot of me on my bike with the medal, because who doesn’t love bling?

Now I have to start running again since I have a 5k coming up next month and a 12k in December.

I had to ask a question of Jamie this weekend. “Do you want to graduate on time, or do you want to do summer school or another year of school?” She’s 2 weeks behind, Chad is 4 weeks behind. Craziness. I’ve cut off internet for both. James said yesterday that they needed gas for their mopeds, and I told him I had been deliberately not getting more gas for them for the same reason they have no internet. And since he isn’t making them do their work which is the whole reason he isn’t working at a real job that actually pays, I have a fun-filled pending talk to have with him.

Anywho, Amber tore up my hand yesterday while we played. I didn’t realize the damage until I put on lotion and it burned us. I was very amused at KitKat’s ungraceful falling off of things she was sleeping on over the weekend.