I had my second DNR this weekend. Even if I hadn’t already planned to not race, I wouldn’t have because I spent a good chunk of the morning on the toilet thanks to the glutening 2 weeks ago. I might have spent that time regretting the spicy pumpkin dip I’d eaten the day before also.

Friday night, I went to Chatham Marketplace to get wine. As I was walking up from the parking lot, I noticed some young folks (I assumed college students) with clipboards, and I mentally groaned because I didn’t want to do a survey or buy anything or talk to strangers. They were supporting a cause, and trying to get others to support it. I politely and respectfully declined. But I didn’t get away so easy as I asked myself “Why didn’t you just go to Food Lion??” I was wearing my Ninja Challenge tshirt, and so we had a nice chat about that. I didn’t buy any wine either. I did pick up some more quinoa which I get from their bulk bins, and the sack busted open when the guy put it down on the register to weigh it. Oh, man. That stuff went everywhere! I was so glad it didn’t do that to me. lol

Saturday was a pretty busy day after spending the morning in the bathroom. lol The hubster and I went to get some nuts and bolts and locking washers to put the new spindle on the mower deck. Then we went to Harris Teeter to get Jaffa cakes for the kids, but there was only one box left so they had to share. Anyway, I got a pumpkin spice latte since Starbucks was right there in Harris Teeter.

Then off to Walmart where I got this: 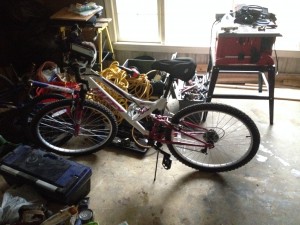 Yes, it’s a cheap Huffy. I didn’t get it for it’s speed or lack thereof. I have a good track record with Huffy. I took it out for a 3.4 mile ride that evening, and had to stop halfway and rest my butt. I’ve since adjusted the seat tilt, so hopefully it will be kinder to my backside. lol And I do have to this to earn this month: 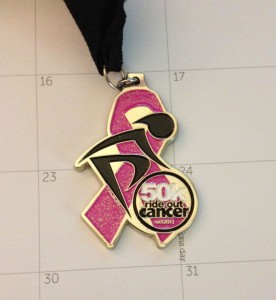 Oh, yeah. The riding mower is fixed. But hardly any mowing happened because the hubster and I both woke up sick yesterday. And I am still sick. I called in this morning and said I would keep it at home today and share it tomorrow.

I thought I would do just a little bit of maintenance on Chad’s “old” laptop before I call Dell to have the screen fixed…again. Now I see why says it’s crap. It has issues and I’ve been troubleshooting the wireless on it since yesterday. Something is hogging some serious resources on it.

2 Responses to 'Odds and Ends'