Skip to Content
Archive for the Funday Friday Category

1. I am bipolar today. I woke up ready to kill the white cat. I’m not sure she will survive until I can get her spayed. But then as I was taking stuff out to the van, it was just so nice and peaceful out that I got instant good mood. But then I got to work. *sigh*

2. Remember when I said “Be real”? Yeah, I had to eat my words and be real this week. It really isn’t fun even when you know the response will be in love…and it was.

3. Had my 2nd follow up with the ENT this week, after totally forgetting about and missing the original appointment last week. Everything looks good and I don’t have to go back for 6 months.

4. Speaking of the ENT appointment, I figured since my lunch was heavy on onion & garlic and the doc would be up close & personal to my face, it would be kind to brush my teeth before I went. That’s one of the reasons I keep a toothbrush & toothpaste in my desk at work. That and in case I forget before I leave home. Yes, that has happened and is also why I have deodorant in my desk. Anyway, I haven’t used Colgate since like January? I’ve been using Tom’s flouride free which took some getting used to, and now I know why. The Colgate was like brushing my teeth with sugar. Seriously. I’m not a big fan of Tom’s either and may just go straight baking soda & peroxide when it’s empty.

5. I caved to a temptation a few weeks ago and bought a soda. It was not good, and so I didn’t drink it even though I used to love it.

8. My mom turns 80 next month. 80. That’s old. She is the second oldest in her family now with one cousin older than her.

10. I need a vacation. A real vacation. It doesn’t have to be very long. Just a weekend would do the trick.

This entry is filed under Funday Friday. | 4 Comments

“Is that Freedom Rock?”

I don’t really have anything, and it’s getting late in the day, so…

I cannot to this day hear Layla start up without remembering that awful commercial.

This song always makes me smile.

Yes, it is on my running playlist, and yes, I always sing it out loud if I’m running with Jamie. That’s why she makes it a point to always have her iPod when we run together. haha

This isn’t on my running playlist, but it is on my iPod. Dolly only gets out “Why’d” before Jamie is saying “NO!” It always makes me smile, too, and remember sitting at Pizza Hut after getting off work at Sweeden’s with my friends who had all just gotten off work at Bonanza. Fun times.

This was so totally worth wading through multiple Four Seasons videos.

A lot going on with that group…

I love this song.

What? I said I didn’t have anything.

This entry is filed under Funday Friday, Video. | 13 Comments

I remember how much Molly loves that song. I posted a live version of it on Facebook one Friday last summer, and she seemed very appreciative. LOL That evening I met her, Petra, Brittany, and Josh at church to work on decorating for VBS. She was even more appreciative of Petra and I singing 9 to 5 to her shortly after I walked in the door, and I think Josh and Britta were just as appreciative. haha

That was the beginning of a fun week, and that is saying something because I don’t use “fun” and “VBS” together. Molly had finagled me into doing music, much like Sarah had done the year before. Neither of them really had much of a fight to get me to do it because I would rather lead the music any day than be a floater or a teacher. I was so pumped because the music was really upbeat, and heavy on drums and I got to pick out a couple of songs that I just loved. I had a leader packet for the music & skits (because the hubbster was PandaMania Pete & therefore, the skit guy), and it really helped bunches in getting the hand motions down with the songs because it described what the motions were supposed to convey.

First night, Molly said to me at some point “You are killing me with Sing Sing Sing.” I totally did not understand, and would have forgotten about it had I not later made some awful statement about the prizes to Petra who also mentioned Sing Sing Sing…and visually explained what they had thought when they saw the hand motions. I just about DIED laughing.

It slipped by me because I head read the explanation in the leader packet and knew that the questionable hand motions were SUPPOSED to be that of a choir director. However, the actual motions themselves failed…badly. As you can see if you watched the VBS video.

The hubby helped with the leading and so that first night, I was kind of in the middle, hubby was to my left, and Molly was to my right. The second night, she had convinced Petra to get up there with us (because Petra has some dance moves – seriously – hahaha), and so the four of us lead with the hubby and I taking one side and Molly & Petra the other. By this point, Sing Sing Sing was a running joke, and I had stopped doing the motions exactly like the video. But then night 3 happened. We started Sing Sing Sing, and suddenly Molly and Petra are in front of me, FACING me, overaccentuating the moves in perfect coordination as if they had practiced that, and I just lost it. They were then dubbed my Solid Gold Dancers.

So, yeah, that was a fun week.

And I miss my Solid Gold Dancers…

This entry is filed under Funday Friday, Video. | 4 Comments

Yes, I think I have lost my mind

Because seriously, who runs a 5K on a Friday night? This is all Molly’s fault. Have I mentioned she is the one who got me running last summer? After years of refusal to run unless chasing or being chased (and life or death being involved in either)? It is so bad now when Brenda was training for and talking about running a marathon, I didn’t tell her she was crazy like I used to. Anyway, so Molly posts this the day I started running again. I made my little comment and moved on, but Monday morning (her morning since she is in Alaska), she started in on me to do the Jelly Bean Virtual Race. So I signed up, and did it today after work because 1) it was cold and rainy at lunch today and 2) I have a date tomorrow.

After my second attempt to print out and write my name on my race bib, I took a photo that Fluffy III tried to photo bomb. 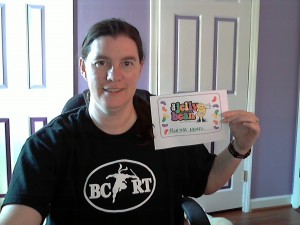 Then I went outside with the hubby taking a photo before I took off. 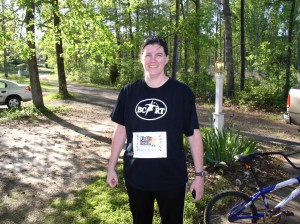 And off I went. I remember being so happy when I passed the Webster’s house and I was still running. I thought that was a full mile, but it may or may not be. It isn’t according to mapmyrun.com, but I think my trip meter on my car said it was. Regardless, I was almost to their yard when I got the first urge to vomit. But I didn’t. That may have been why I couldn’t make the hill just passed their house, and spent the next mile unable to run more than a few feet at a time. I was wearing ankle supports because I need new shoes, at least that is what I figure the problem was running yesterday when my ankle starting hurting after the first lap and I didn’t turn it. But anyway, the ankle supports kept my ankles from hurting, but sure made my arches hurt.

But I pressed on, and made it home, running the last quarter mile (which is downhill…and don’t judge).

Taking a photo with my phone wasn’t working out like I wanted, so I got Jamie outside with the camera. 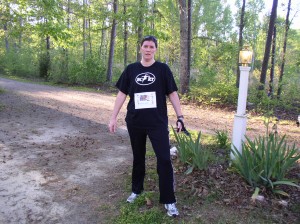 I was still gasping for breath, and was having problems with standing, but I didn’t puke or pass out (didn’t even get dizzy – lol). I didn’t do as well as I would have liked, but I’ve only been back running a week after not running for a month. Or more. Anyway, I know a 5K is 3.1 miles, but my from home loop run is 3.4 miles, which I finished in 45:56. That would be my personal best.

And it hurts. Everywhere. Just sayin’…

It was a problem. At some point in high school, my best friend got me hooked on Santa Barbara. No, I am not the soap opera watching type. Sure, I did watch General Hospital for a while as a kid, but that was for Rick Springfield only. Clearly, that was a problem, too, given that I was like 10/11 years old at the time I was watching GH. But, I can remember skipping class in college to watch SB, and then getting angry that the “cliff-hanger” wasn’t resolved for like another week. But I digress.

William Shakespeare. We were supposed to read Romeo and Juliet in 10th grade. I never did. I knew the gist of the story. 12th grade I think we had to read Hamlet in AP English? Honestly, I only read 3 of the however many books we were supposed to read in AP, and 2 of those pissed me off because of stupid endings. Actually, those were the first 2 books, and that’s why I refused to read any more. I did read Job (from the Bible), but didn’t really get it. (Because of the languange.) I still have problems getting through Job and I’ve read it 5 times since in 5 different translations. But, again, I digress. I didn’t understand Shakespeare’s plays, and I didn’t get his sonnets either. Nor did I get (for the most part) any other poetry. Yes, I dabbled a bit with writing poetry when I was 18 and idealistic. Before you ask, read that again: “18 and idealistic.”

Now you are probably thinking, “What is your point?” I know. It’s like the “random” posts with paragraphs instead of numbered one/two liners. There is a connection. See, there was a character in Santa Barbara by the name of Mason Capwell who was played by actor Lane Davies for the majority of the soap’s televised life. Mason quoted Shakespeare…a lot…and well. Teenage me was captivated by it, and developed what I dubbed the “Mason Capwell fantasy.” I was particularly enthralled hearing him quote Sonnet 29:

When in disgrace with fortune and men’s eyes
I all alone beweep my outcast state,
And trouble deaf heaven with my bootless cries,
And look upon myself, and curse my fate,
Wishing me like to one more rich in hope,
Featured like him, like him with friends possessed,
Desiring this man’s art, and that man’s scope,
With what I most enjoy contented least;
Yet in these thoughts my self almost despising,
Haply I think on thee, and then my state,
Like to the lark at break of day arising
From sullen earth, sings hymns at heaven’s gate;
For thy sweet love remembered such wealth brings
That then I scorn to change my state with kings.

I didn’t get the sonnet then, and I mostly don’t get it now (because I really don’t care), but to hear him speak it… Ah, I wish I could find a copy of it somewhere out there on the interwebs…

I remember how much MacBros enjoyed this song on Facebook a couple weeks ago.

Revenge is a dish that is best served cold. Or sometimes lukewarm. LOL

This entry is filed under Funday Friday, LinkWhoring, Video. | 6 Comments