This looks to be another busy week. 3 counseling appointments today. 2 for the kids, and 1 for me. Fun times. Since I was going to have to miss half a day of work anyway, I decided since my bed felt so good this morning, I would just take the whole day. I may or may not regret that decision. 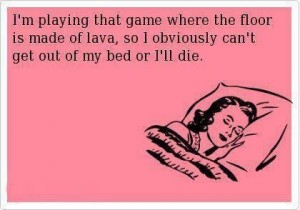 I lost a battle with the lawn mower yesterday. There’s just too much to describe without pics that I don’t feel like taking, so suffice to say that even though I can easily put the blade assembly back into the spindle and tighten it down, I cannot get the belt out from under another pully (that has a stripped bolt). So it’s going to probably require a new belt unless the hubs can get it out. But, after that battle was lost, I went in and showered, and by this time Jamie was the only one home besides me. She announced she was leaving shortly, and there I was left at home. Alone. In. The. Quiet. It was fabulous. So much so I had to text Petra and gloat a little about not knowing what to do with myself. She gave me a suggestion which I followed.

And then the kids came home, and I went to bed. lol

KitKat. That cat is so stupid. This is where she has been perching lately.

She sits there, falls asleep, and then falls off. Then she runs right back up there and does it again. Over and over. And Jamie won’t keep her in her room at night to prevent it. Dumb cat.

I’m on the schedule for next Sunday. This time there is only 1 song that I don’t know at all. lol

I’m working on eating clean again. By clean I mean no artificial colors/flavors and minimal artificial preservative. Went grocery shopping Saturday and one of the items we needed was salt. I went after sea salt. James was with me and picked up a container of salt and said “Here.” I took it and looked at the ingredients. Then I read them to him. I picked up another container, and handed it to him saying “Read the ingredients.” “Natural sea salt.” Ok, it probably isn’t “natural,” but it claims to have been harvested from the Mediterranean. And it is one ingredient. Salt.

Now I am back after the meeting with the kids’ counselors. James looked at me and said “You look tired.” Understatement. Drained. And I still have my appointment to go to. It will be a barrel of laughs now. Not that it ever is.

Someone pooped on the floor in front of the litter box instead of IN it. KitKat has a history of that. Stupid cat.

And I rode 9.8 miles Saturday. There is a hill I am determined to conquer. I didn’t have to push my bike up it this time, but I did stop 3 times on the way up before I made it to the top. If I can ride up St Vincent street, I can ride up that hill. Ok, I probably can’t ride up St Vincent right now and since I live 900 miles away, I won’t be trying. 25 years ago I could ride up St Vincent. Anyway, I really pushed it because after about 3 miles I saw rain clouds. I then began to race against the rain. I would say that I won, except the rain went around us.