This was a weird week. I should have known it would be weird when I woke up Monday morning at 2am to a panic attack. For those who don’t know, panic attacks have been an issue for me off and on since I was about 6 or 7. For several years instead of panic attacks I would have just anxiety, and a full-on panic attack was drug-induced. This is why I tell doctors not to give me codeine. Anyway, I had them really bad for about 2.5 years after I got out of the Air Force, and that’s when I noticed a pattern. Panic attacks follow periods of high stress. Later on I noticed depression follows the panic attacks. But I am digressing. I woke up with chest pain, and before I could get all the way awake and reason the pain out, the panic set in with “I’M HAVING A HEART ATTACK!” That got me all the way awake, and I had to talk myself down with “No, it’s gas. Chill out.” I went right back to sleep, but the repeat was a couple hours later. This led to an all day fight Monday wondering if it was the panic or if I was sick because I just felt like crap all day.

Tuesday morning I got up as normal, feeling fine, and went to the bathroom like normal, only after I sat down it ceased to be normal. Didn’t even have warning cramps. Just exploded. At that point I knew that Mondays events were me getting/being sick. I called in Tuesday, felt bad for doubting Jamie saying she was sick on Sunday, and realized that James and Rick each had it also to varying degrees. James not as bad, Rick worse. Chad managed to escape the bug. And yes, it was a bug because we didn’t all eat the same things. Weakness and achyness lasted the last couple of days from the bug.

Monday night I finished Chad’s scarf (and I wove in the ends of the hanging yarn before I gave it to him). 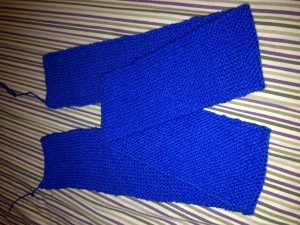 I was so sick of working on that thing, but I really didn’t appreciate how easy it was until I started on a scarf for Jamie that involves actually following a pattern. For Chad’s, I just did 1 stich and the rows were all 20 stiches wide, and I just knitted until I was satisfied it was long enough, which was about 5 1/2 feet. For Jamie, I decided to make a Slytherin scarf. Of the first 44 rows, I’ve done 4.

I wandered around yesterday on 3 hours sleep, plus the half hour nap I took at lunch. I was a complete wreck, and I don’t know how insomniacs manage to function.

I laughed so hard at this: