My flesh and my heart may fail,

but God is the strength of my heart and my portion forever. (Psalm 73:26, ESV)

I don’t think I took my “happy pill” yesterday. There was that moment where I looked at the bottle and could not remember if I had taken it or not, but decided against risking an OD. Not that I know if you can OD on 40mg of Celexa. I’ve missed doses before. This past Saturday as a matter of fact. There were no ill effects. Yesterday though. I bottomed out.

I blame(d) the lack of medication because it was just out of the blue despair. Or so I thought. I did enough backtracking through the day to discover the trigger was a video I had watched. From there I was able to root out the discontentment and resentment that were in the pit I found myself in. It’s a dark pit where the darkness is heavy and constricting. Prayers were said, tears were shed. Withdrawl happened. Not complete withdrawl, but alone time to sort the truth from the lies.

I remember the first time God spoke “audibly” to me. It wasn’t a loud booming voice like I imagine he spoke to Moses. Of course there is a story to it. I spent probably half my early childhood begging my parents for a swing set. Like this: 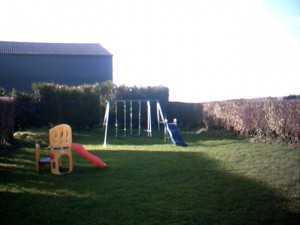 Yes, I got the kids what I wanted when I was a kid. Anyway, I never got one, but my dad made me swing by buying some nylon (or plastic) rope, and hanging it from a tree limb. In hindsight, that was a way better swing. Anyway, that old rope swing gave me many many hours of fun. I would get it swinging as high as I could (which was way higher than a “little” metal swing set swing could go), and then jump out at the forward apex. I did that so much one weekend that my legs were so sore I could barely walk for 3 days.

That was what I was doing: seeing just how high I could get the swing going before jumping out. As I was on the back swing just before that apex, I clearly heard a voice in my head telling me to stop. As I came back down, I put my feet down to stop. As soon as my feet were firm and stable on the ground, the rope broke. If I hadn’t listened to that voice, I would have gotten hurt. Maybe seriously, maybe not. Regardless, I would have been hurt. But it was years before I would realize what that voice was. Or rather, whose. I don’t remember how old I was, and I may or may not have still been using that swing while in junior high.

I don’t think I ever told anyone about that except for my mom, though I might have told my dad when I told him the rope broke. But I don’t remember actually telling him. I know I did because he was going to notice and then wonder why I didn’t tell him. Plus, he was the only one who was going to fix it. lol But I think it was just within the last year that I told my mom the whole story of the incident. She recognized the voice for what it was. She may not remember what day it is, or people’s names, or whether or not someone has died, but Alzheimer’s has not yet touched her mind where theology and doctrine are concerned.

I wanted to hear Him yesterday like that, and well, every time I find myself in the pit. I don’t, but yet I don’t really feel completely alone either. I mean, in the deepest, darkest, heaviest point I do, but once the load lifts, I can tell I wasn’t alone. It’s really hard to explain it. It’s kind of like and aftertaste, only just a feeling. A closeness if you will.

So, this was a bit ADD. Hence the title. That’s how I roll.

5 Responses to 'Thinking out loud'