I did a little something different and actually started an outline of things for the Monday post over the weekend. Now I am thinking how on earth am I going to kick this thang off? Because why should I just jump right in to my list? Ok, my coffee hasn’t kicked in yet, and it’s been a rush of a morning and I didn’t sleep well because I drank chai tea all day yesterday. But, on the very bright side, as I rushed into Starbucks this morning, Petra’s husband Andrew was in line and bought my coffee, so I was able to rush out as quick as I rushed in. Oh, and Petra is blogging again!! Yay!!

I ran race #13 of 13 in 2013 Saturday morning before the cold air came in. It was a 5k Victory Run/Walk for Gerome Williams, Jr. His sister Nicole is a friend from the Brick City Run Tribe, and it was a fantastic event with a great turnout of folks supporting Gerome. I don’t remember much of the details, but he has a rare condition that caused his liver to fail, and for him to need a liver transplant which he got a couple of weeks ago and is still recovering in the hospital. Keep him and the whole Williams family in your prayers as he recovers. I shamelessly stole a couple of photos off the BCRT page on Facebook. 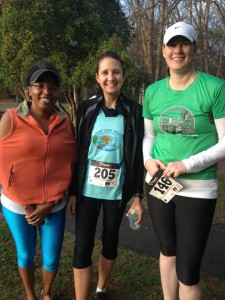 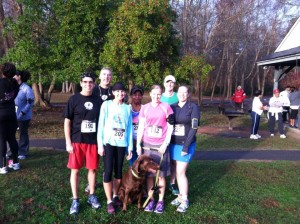 I couldn’t stay for the awards, but 3 Tribers placed among the top runners.

I left because I had signed up for Christmas decoration & cleanup at church, and headed straight to church in my running clothes. Sweaty and all.

Pastor Nate was just outside the door as I got there and he told me who to talk to for if I wanted to do outside or inside. I chose inside since I wasn’t really wearing work clothes, and he said to see Ted. That’s when he got the question: “Who is Ted?” I hated even asking that question because you would think that since we have been going there since February/March that I would know the names of more than a handful of people. Anyway, he took me in and pointed to Ted, and I was like “OH! I know him! I just didn’t know his name!” And laughed. Ted was the same. Knew me, but not my name. There was a lot of that throughout the morning, and I am not alone. The faces that I knew are the volunteers who greet and do music and teach the kids. Then there were a bunch of people that go to different services, and over the course of the morning we chatted about that and how there are a lot of people we never see because of different services. That’s the downside, but the upside is that we are large enough to need 3 services and the building isn’t that big. Was a great time, and great folks. Not once did I hear any gossip or backbiting of another member or former member. And, as we got to the end of the work when Nate brought in the pizza and I grabbed my last Kind bar, I got to talking with a lady, and by that I mean she almost literally cornered me. There was a point in the conversation where she asked, “You’re and introvert aren’t you?” LOL!!! When I confirmed, she said, “Well, not now you’re not!” Yeah, she talked my ear off, and it was fine.

She is also good friends with the lady that I fluffed the wreaths with. And before we all left, we were like a little hub of folks stopping and chatting. And you know they will nearly all have to tell me their names again.

Evie. I went home, and as soon as I got in the door, Evie puked. I said she puked on me, but I think it just splashed up on my ankle from the floor. It was all over the end of the couch and the floor around that end, and smelled like vomit. I gagged, changed my shoes and left. No one else was home except Chad and he was in his room asleep. He and Jamie missed that joy.

Thanks to Evie, I was not up for eating anything at the house, and since I had only eaten 3 Kind bars and quarter of an orange that whole day, I was pretty hungry. I needed to pick up some stuff, and went back and forth between whether to go to Dollar General or Walmart, but opted for Walmart as Harris Teeter was on the way and I could get sushi without getting glutened. Maybe. I don’t think I did anyway. I sat in the parking lot to eat it, and then just kept sitting there playing Whirly Word because it was quiet. And then I took a nap. Yes. I napped for an hour in the Harris Teeter parking lot. It was fabulous. I only vaguely remember the trip to Walmart. lol

I talked around an issue Thursday in my Thinking out Loud post, but didn’t really do into detail. And I’m still not on here (yet), but all the angst and despair just disappeared when I got home the second time Saturday. It was most certainly answered prayer, which had prompted me to continue that prayer. I might drag a post out of the drafts hole that deals specifically with the issue later this week.

Dr Who. I had never watched Dr Who. My husband has watched it for years, and so I had a general idea of the premise of the show. With the 50th anniversary this weekend, I decided to watch it. I was going to Friday night, but I didn’t feel like it and only set to record it. I watched Day of the Doctor Saturday night with the hubs, and thought it was pretty stinking cool! Now I am all like “Why have I never watched this?” 50 years and 12 doctors. That’s a lot of catching up to do.

Once Day of the Doctor was over at 9pm Saturday night, I went to bed. Pretty sure I was asleep before I ever got in bed. Anyway, I was all set to sleep all morning, and then the phone rang at like 7:30am. Panic set in expecting that call you don’t want, but it was Chad’s cell, and I could tell he was shivering as he talked. He had spent the night at Alex’s, and was starting the walk home…in flip flops…and could I please come get him.

So I put on my moon booties and my big coat, and turned the butt warmers on in the car to get him in my pjs. I was pretty sure my sleeping was over, but yet I crawled back in my nice warm bed and went right back to sleep until nearly 11. Woke up with a splitting headache, upper back/shoulder pain, lower back pain, and hip pain. I had laundry to do, prepping for today’s potluck at lunch, grading and scheduling, and church. I had the back pain Saturday, and motrin didn’t touch it. I ended up in my pjs all day long.

Chad brought me his stuff, so I started grading his work. He finally got caught up, but the answers on a couple of things did not match up with the keys. Then it hit me. I had not put the keys away, and so he had gotten them and tried to cheat but copied the answers from the wrong pace. SMH. Jamie still hasn’t finished.

I got James to carry the laundry back upstairs for me, so I wasn’t as bad as it could have been. I really dislike every part of laundry except for having clean clothes.

I signed up to bring dressing and gravy today. I managed to get everything prepped last night so that all I had to do with the dressing was to put it in the oven, and I made the gravy while the dressing was in the oven. The gravy started out too thick, and so I added more milk, but it was too much so it is pretty runny. Oh, well. I made it with bacon grease. Bacon makes everything ok.

I had some fun with Chad this morning. I don’t remember much of it, but I remember telling him that his friends would be over again sometime, and there would be some more 80’s at which I spoke the words to We Got the Beat. We chatted about that some more and I asked if they had the same reaction to Our Lips are Sealed which I actually played along with. “I don’t even know what that is.” Really, Chad? So then I’m all “It’s another Go-Go’s song. Same album.” Because my 15-year-old should be very well acquainted with pop music from 1981. I told him to YouTube it. He refused. So I did it for you all.