It’s been a while. I put off writing something I wanted to write about, and now I’ve decided that if I do write about it, it will be all snarky and end up with me being exactly what I want to rail against. So now you get a list post of catch up material. You know, for the 2 or 3 of you who still keep up.

1. Rather than doing a recap (way after the fact), you will get the Reader’s Digest version of the last race. The Wednesday (I think) following the Ninja Challenge, Karyn dropped a link to a race on my Facebook wall for that Saturday. Thinking “It’s only a 5K,” I signed up for it (and the hubby too). Who knew that on May 25 we would wake up to temp in the low/mid-40s(F)? 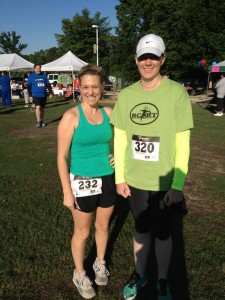 It was a trail, not real rough, but not real smooth and way more hills than I wanted to do. I struggled. Bad. Then as we were coming in to the finish line, a chick who had walked much of the course (ok, maybe she didn’t, but every time I had seen her prior she was walking) passed us running to the finish. I decided that she was NOT going to beat me, and busted out into a sprint to the finish line. Karyn was shocked to see that kind of speed come out of me though I am sure I wasn’t going near as fast as I felt. LOL

2. The first weekend in June, the hubby went to a small music festival that a friend of his hosts every year. He came back and told me “I brought you something.” I got all excited thinking he got me some of that fantastic homemade wine, but it was a small (roughly half-pint) jar of moonshine.

If you like sourmash, it was good. I don’t, but I drank it anyway ’cause that’s how I roll. And not in one day either.

Then 2 or 3 days after the festival I come home, and he opens up the front door, and this ran out: 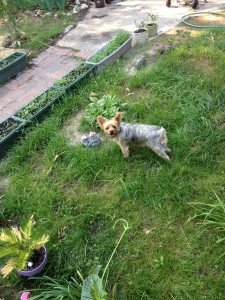 Yes, he brought home another dog under the reasoning that someone else wanted a dog like that. Her name is Precious, and yes, we still have her.

KitKat is not amused.

3. Tiger and Sushi are doing really well. They got totally eaten up with fleas, and we undertook chemical warfare this weekend to rid them and the dogs of the flea menace. KitKat kept herself well hidden and managed to (so far) escape bath time and/or dusting. She isn’t likely to get a bath because despite her fat, she is quite nimble and not afraid to sink her claws to the bone.

4. Friday night I sent Karyn a text asking her if she was up for 10 miles on the American Tobacco Trail (ATT) in the morning. She said no, but that she needed to. So I asked her if it would help that we only had to run 7.

So we go out there, and if she hadn’t been going, I would have gone back to bed. But, it turned out to be a much better run than I was expecting. Just after the 3 mile marker I met Karyn on her way back, and told her I had improved my 3 mile time. I was feeling great and kicking it. And then I hit a stretch of trail that wasn’t shaded and nearly died. And had to run back through that stretch after the turnaround. But I got my third wind around mile 5, and even after sprinting the last tenth of a mile, I felt like I could keep going. However, I was very glad I didn’t have to! Twice during the run I had to stop and rake pea gravel out of my shoes, only the second time when I did the rake, I nearly cried when I realized that was NOT a rock, but was a blister. Evidently I can no longer wear the really short running socks.

5. Father’s Day was rough this year. For me. I might write specifically about why at some point.

6. June 9 I had to take Chad to pick up a game we preordered on his birthday. This year his birthday gift was one that just keeps on taking, and I’ll have some more pain in August or September when the other one comes in that I preordered for him. Anyway, since Starbucks was right there I “needed” to stop. Now Saturday morning when I picked up Karyn, I told her that we would be going to Starbucks after the run. And when I ordered (at the drive through) the dude who took my order was very friendly and Karyn made note of it. So I then told her about the stop with Chad because that dude was just as wacky friendly. Which is fine. It’s entertaining. What wasn’t entertaining on the 9th was when the dude handed me my coffee and hesitated over the handoff as our hands were (awkwardly) touching. 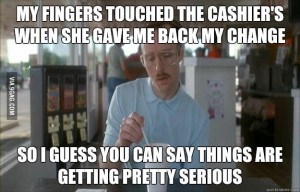