I started saying that minutes after registration which was back in March? Around 3:30am Saturday morning, I decided that I was NOT doing that race. From 2:30 – about 4am, I was awake trying not to puke. I might have made a huge mistake eating as much as I did the night before. But, when I picked up my race packet the night before, they were out of tshirts in my size, so I had to at least show up on site to get my tshirt. And once I was there, I thought, “What the heck. It’s only a 5k.”

Oh, my word. Not only was it an obstacle course, but it was a rough trail. I rolled my ankle shortly after starting, and rolled the other at the end of the next to last obstacle. I have to say, the obstacle course I did in basic training was harder overall, but I was also a very fit 25-year-old in basic. 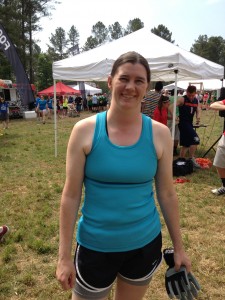 That smile was all fake. Like I said the trail was rough, but the first 2 or 3 obstacles weren’t really that bad. Then we got to “Iron Mountain.” I heard some saying the 2 big ones were 6 ft and 8 ft. Pretty sure the 6 ft one was 6.5 ft. I didn’t make it, but my 2 attempts did manage to leave me pretty bruised up. I didn’t attempt the taller one, and just went on around. 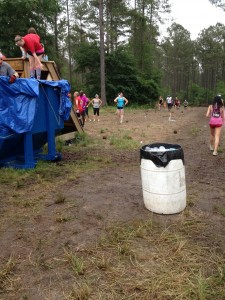 I didn’t make it up this the first time, and have a scraped up left thigh to show for it. On the other side was a dumpster full of what was pretty nasty looking water by the time we (the 5th wave) went through it. You can go to Instagram and see me trying to get out of the dumpster. It was chilly. Also, here is my not-so-graceful landing: 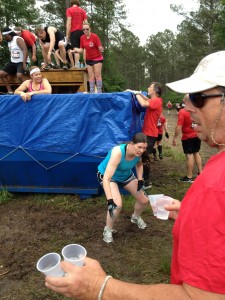 Then James told me “This is the 1 mile mark.” That is when I dropped the f-bomb because I was already done. I didn’t do much running after that choosing to save what little energy I had left to get through the remaining obstacles. Besides, I was soaked from the waist down and running with wet shoes and socks just sucks. I failed at the “monkey bars”, and fell off the balance beams and the wall past it. I had a panic attack at the top of the rope ladder wall when I went over the top. I fell off one of the incline boards too. And then came the pond.

The muddy bank on the other side was when I rolled my other ankle.

There was only one more obstacle after that, and I didn’t even attempt it. But, I saw the guy I chatted with at Iron Mountain who was running solo because the team he was supposed to be running it with didn’t/couldn’t. So I waited on him, and was impressed that he helped the 2 people after him get up that last obstacle, and I finished with him. 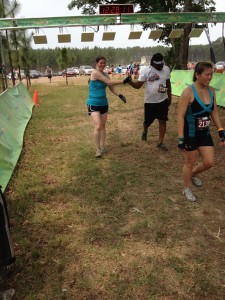 I could barely get around yesterday, and I am still pretty stinking sore today. But even though I cried in the shower over the scrapes and chafing, and keep moaning about being sore and bruised up, I am totally doing the Ninja Challenge again next year!

This entry is filed under Exercise, Fail, Photos, Running, Video.

9 Responses to 'The Ninja Challenge'