A few days ago I had a dream that my friend Brenda came to visit me. Now, as an aside, she has been planning a trip out here for months, and we even plan on running a race together while she’s here. That’s reality. In the dream, she had signed us up for a marathon. And when she told me what it was I flipped out! She said it was the RunRaleigh marathon, which in reality is just a half, but in the dream it was the Raleigh City of Oaks full marathon. And this is why I flipped out because I only did the Rex Heathcare half, and would have died if I’d had to run another 13.1 of that route. So I told her, “Heck no! Hills, Brenda. Bad hills!” I told her of this dream the other night and she was quick to point out that she would not ever sign us up for a marathon because she has no plans to ever run another marathon.

Saturday was a 9 miler on the training plan Karyn did for us, and between the cold and errands, we decided to each do 9 on our own this week, do our 10 at CCCC, and then do the 11 & 12 on the American Tobacco Trail which will be part of the actual route for next month’s half. I must point out that this whole time we have been training, I have been avoiding both CCCC and Kiwanis because I haven’t been able to bring myself to do those hills over and over for multiple laps. I decided I would do the 3.4 mile loop by my house in enough laps to equal 9 miles. But then I got up Saturday morning, and changed my mind about that route, and did what is typically my 4 mile route but added on another road which was an out and back 5 miler. I knew it was hilly, but I really did not understand what it would be like running 2.5 miles of uphill. Oh, man, that was rough! I kept reminding myself that I did a hilly 10k the week before, and therefore, I could make it back to the 6 mile point and, if necessary, walk the last 3 miles.

I made it back, and was hoofing it slowly up a light grade, and finally decided I was done. So I walked a little bit until my legs felt a little better then tried to start running again. I made it about a block, and gave up the run and dropped to a walk. After the turnaround with less than 2 miles left, I noticed a burning near my right ankle. So, the last mile and a half was more of a limp. Apparently my sock had dropped and my shoe rubbed a killer chafe just under my ankle. Anyway, I spent that last mile and a half forcing myself NOT to call the hubster to come and get me. Just as I got back to our driveway he called and instead of saying “Hello” I answered with “COME AND GET ME!” If I hadn’t answered, he was going to come look for me because I had been gone over 2 hours.

So, I will just say that my quest to avoid hills was folly, and I have paid with sore knees, hips, and back.

And this was my run for Sherry only I forgot my bib until after I was half way down the driveway, and I knew if I went back for it, I would never run at all. 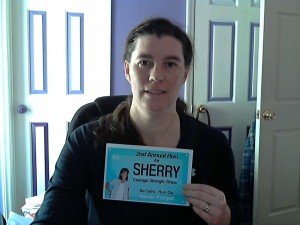 No smile. Only a grimace because I was hurtin’!