This was supposed to be last Friday’s post, but it didn’t even get started. That’s how I roll.

What was supposed to be a cake/skate week for me was anything but. So this will be a rambling recap.

1. The hubster got back Wednesday after nearly a week working in the boonies of TN.

2. My youngest teen finished up one of the steps of his diversion plan. I may or may not have posted about him pulling the fire alarm a school about a month before school ended for the summer. It wasn’t entirely an accident, but not entirely on purpose. And because it happened before school started for the day, and he immediately told the principal he did it, he got off easy with a 5 day rather than 10 day suspension, and given a diversion plan rather than going to court. Fun times.

3. Tuesday, the youngest went to spend the night at his friend’s house. Wasn’t long before I get a call from him where he says, “Um, the police are on their way and they are going to want to talk to you.” So I went down there and he and his friend filled me in on the details which essentially amounted to them along with friend F2 (who due to this incident wasn’t at friend F1’s house) being accused of stealing stuff from someone’s car Saturday night. Mine was at home all day and night Saturday with me, F1 was with his mom all day and night and not even in the county, and F2 is as unlikely to be involved in that sort of thing as the other 2. F1 did say to my son “You do have a record…” That was the only humorous part of the whole situation. Anyway, police never showed, F1’s mom offered me wine that I almost took. For a brief moment I considered bumming a cigarette from her too.

Like how I used no names in that? F1 & F2 were originally #1 & #2, but then I started giggling over that naming convention and decided it probably isn’t an appropriate method for referring to my son’s friends.

4. Planks. They still look easy. They are still ridiculously hard.

5. Sat on the front porch with the hubby while a big line of severe thunderstorms headed for us. Of course they split and went around us like they do. It made for a nice peaceful time though. And a couple of good pictures. The sky above . As the storm rolls in…

6. Karyn and I ran the EspirtdeShe 5k in Cary last night. Rather she ran the 5k, and I ran until the first hill, and with the humidity being so stinking high, I couldn’t breathe any more that I could see the top of the hill. The was a lot of walking and wheezing done the last half of that 5k. 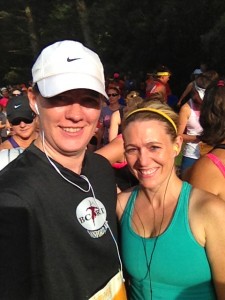 Sweat running before we even started running. 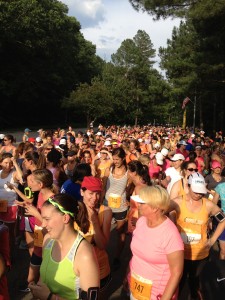 That’s a lot of women…

We were going to meet Eva (who ran the 10k) after we all finished, but there was an emergency that popped up and we had to leave right away. Nothing like a situation like that to make it seem like it is taking forever to drive from Cary to Sanford. And everything is fine.

Oh, and Karyn came in 65th overall out of 471. How cool is that! I finished in less time (even walking up the hills) that the Rabbit Run that I ran entirely. Go figure.

7. I have a card just like this posted up on my desk at work:

I don’t think my son believed I would do it. And no one has pointed out that I have a My Little Pony card displayed on my desk.

8. I have nothing else, and this is hilarious!