I for one am glad 2013 is over. On the other hand, 2014 might not be better as I may or may not have a job come March when the contract ends. But, contracts come, and contracts go, and it’s not like I haven’t been through a contract end before. It is completely out of my hands, and far above my pay grade. Ok, not that far, but I’m not involved so it’s far enough.

The year ended pretty craptastically. I won’t go into details, but suffice to say, I made my first ever Al-Anon call last night. I don’t make phone calls either. But as I was soaking in epsom salts last night (and finally getting warm), I started reading my Al-Anon literature because I hadn’t in a month and a half. And I kept hearing, “Read your literature. Keep coming back.” Being New Year’s Eve, I wasn’t sure if they would have a normal meeting last night, so I called someone from the group to find out. They were having a New Year’s Eve party with the AA group, and I opted not to go for that since it had started half an hour before I made the call. But, hey. I called someone.

As I lay on the bed reading and petting Tiger (because he forces you to pet him), I decided to start thinking about how I had felt the last 2 or 3 weeks. I started feeling like I had gotten it. The peace I was desperate for. Then reality hit again. So I spent much of New Year’s Eve reading my Al-Anon literature after making that phone call. I didn’t find peace per se, but I did relax some. And I started thinking up some goals.

For reasons I already alluded to.

I’ve been using Petra for this. But, I’m side-stepping the program that way since she isn’t in Al-Anon.

3. Read through the Bible.

This is pretty much a standard goal, and I haven’t completed it the last 2 years. I finished the 2012 read through well into 2013, and it will still be a little while before I finish the 2013 read through. I pick a different translation each year. Last year was the ESV, and this year will be the NRSV with Apocrypha. I’ve never read the Apocrypha growing up Baptist.

Surely I can do this in a year.

6. Join a life group at church.

Because as much as I harp about accountability (at least in my head), I should have some within my church.

7. Finish all the books I’ve started. 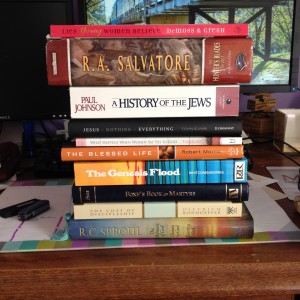 That isn’t even all of them. There is one more hard copy book that Petra gave me to read, and there are at least 2 and maybe 3 Kindle/Nook books I have started and haven’t finished.

I’m only doing the beginner because I know me. Also, the longest race I plan on doing this year is a 10 miler.

This is pretty much the extent that I want to list out goals for the year. Note that I didn’t list pushups.

This entry is filed under Life, Reading, Running, Video.