TGIF. I say that like I have a nice relaxing weekend in store. lol This has been a crazy busy week. Again. And it’s going to be a busy weekend. And I really need to make time for an Al-Anon meeting.

Karyn and Molly double-teamed me with 5ks this week. One is a virtual, and therefore I am going to do The Dynamic Duel Canada vs USA 5k in conjunction with Run to Reclaim 5K. Because that’s how I roll. And plus, I haven’t run at all in like 6 weeks, and Saturday is my only free day to run unless I get a wild hair and do a run during lunch next week. Anyway, running 2 5ks tomorrow just won’t happen. Probably.

I’m playing Sunday which means I’ll be at church almost all day. I’m actually looking forward to it. Rehearsal went great, and I left feeling just so pumped.

KitKat is still falling off the landing.

OH! I killed a HUGE spider Tuesday morning and didn’t even scream first. This was quite an accomplishment. Both for not screaming and for actually killing it myself. James has since referred to it as a tarantula, but it wasn’t quite that big. Then yesterday morning as I got out of the shower and started drying off, I felt something stick into my hand. I looked and saw legs and immediately knew I’d just been bitten by a black widow. So I shook out the towel before finally dropping it to the floor, and then the culprit emerged. It was a red wasp, and it much have just barely stung me because it really didn’t hurt that bad. I also don’t have the huge red swollen area that follows a sting. Just a little swelling, but it itches like crazy now. I might feel a little like honey badger. 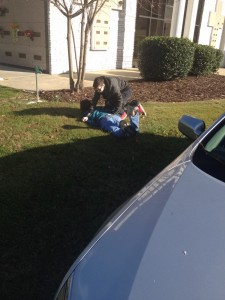 They decided to fight over the front seat. Please take note of where we were. That’s a mausoleum behind them.

Being mom of the year, I took a picture. No one was actually injured, though they did both end up in the front seat wrestling over it. There was no punching or scratching or hair pulling. It ended when I finally said “Enough!” and made Chad get in the back seat because Jamie had called front before we even stopped. You may (or may not) ask why we were at a cemetery. On the way to their counseling appointments (which only I had to attend), Chad asked what the big building was in the cemetery we passed. I told him a mausoleum, which I then had to tell him what that was and that I would stop by on the way back home. One of them asked why we don’t have any crypts here in the states, and I told them mausoleums were essentially crypts, just not underground.

I tried to find a really cool video to end with, and was not disappointed. Ok, it might not be cool, but it is hilarious.