Stick that in your pipe…

Back when I was in college at UCA, there was a particular English professor who smoked a pipe and for the life of me I can’t remember his name. I can’t even blame it on not being in any of his classes either because I still can’t remember my Comp II professor’s name, and I had to look up my Lit I professor’s name. Anyway, I can remember walking through the old Irby Hall just to pass by his office and smell his pipe.

Back in those days, I was a cigarette smoker. I quit smoking cigarettes about 11 years ago, and never really lost the desire to smoke. Well, a couple weeks ago I had a massive craving that lasted longer than a couple hours. But before it was really over, I started thinking about a pipe. So I told the hubby I was thinking about smoking a pipe. He said, “You can’t smoke a pipe and look pretty.” I can’t be 40 pounds overweight and look pretty either, so that’s not an issue for me.

I went to the tobacco store this morning after a corncob pipe. All they had was mini corncob pipes, and the guy even complained that they kept getting sent those mini-pipes when no one wants them. So instead I got a cool looking (my opinion) wooden one. 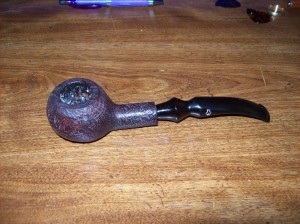 I grabbed a bag of Cherry Cavendish pipe tobacco and it smells just like what that English professor smoked.

It is definitely not the same as smoking a cigarette, even though I am not inhaling it. Even without inhaling it made me a little nauseous. Methinks I need a filter. And I don’t care how redneck/hillbilly it is, I likes my pipe.

This entry is filed under Life, Ramble, Uncategorized.

7 Responses to 'Stick that in your pipe…'