Sheila Gregoire of to Love, Honor, & Vacuum did a series on her blog this week about problems she saw with the popular Christian marriage book “Love & Respect” by Dr. Emerson Eggerichs. I commented on the 3rd post because she said I’ve been thinking for a while – that Jesus often isn’t the center of our teaching. I started a comment and then realized I was about to typed out a big rant, and decided that the potential length called for my own blog post. 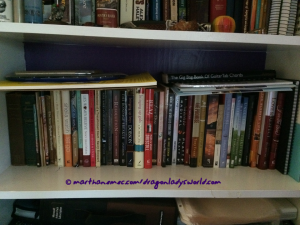 There are a couple of posts I should probably finish first, but I’ll start with this and let the other 2 be explanations after the fact instead of a build up to.

The church I quit last year did a sermon series on this book back around January 2015 (my guess based on when I added and updated Love & Respect in my Goodreads). I didn’t see a problem at the time. But this time last year I started to see what was consistently missing from most (if not all) of the formulaic sermon series (plural) that I was started to really listen to. The Holy Spirit.

I was about to type out a whole rant, but I’m going to save that for my own blog when I have more time.

The “Love & Respect” series was from November-December, 2014. That was during my first year of sobriety, and while I was “coming to,” I was still entrenched in patriarchal indoctrination. And I was still kind of desperate to save my failing marriage. So I didn’t see anything off at the time. That came later most glaringly with the InCite Conference of 2017 with fired pastor Perry Noble who was billed as a headliner of the conference shortly after his stint in rehab for alcohol abuse.

An overseer, then, must be above reproach, the husband of one wife, temperate, prudent, respectable, hospitable, able to teach, not addicted to wine or pugnacious, but gentle, peaceable, free from the love of money. 1 Timothy 3:2-3

Noble had no business being on that stage. Around that same time I noticed several megachurch pastors around the country using the phrase, “The Best is Yet to Come” just as ours had done in connection with a fundraising campaign.

By this time, I had a little bit of sobriety, I was working through some issues, and I was questioning everything. One of my twitter friends was talking about Robert Morris’ book “The Blessed Life” and Morris saying Jesus was “God’s tithe.” That reminded me that he said that garbage when he spoke at our church in 2014 for a sermon series based on that book. I found it odd when I heard him say it, but I was in early sobriety, and barely able to discern yet. Now? God didn’t “tithe” himself. Jesus is God. And even if we divide out the Trinity, Jesus is 1/3 not 1/10. But still, how can God tithe himself and who is he tithing to? HE IS GOD! I haven’t yet been able to get through that book. I have it, and started it because the pastor sent a signed copy when I started giving money only he addressed it to my daughter not catching that it was MY name on the check and apparently assuming that “Jamie” = “James” and as husband he was the spiritual leader. He was not. But I digress.

I had to step down from serving once I went back to school because I couldn’t put in sufficient practice time. If I was just singing, I could, but not playing guitar, and there were loads of vocalists by that time. Also, at this point, I was only attending when I was scheduled on the worship team. I was still listening to all the sermons via podcast, but then a sermon series happened that got all over me. The pastor made the statement, “Jesus was a carpenter. He was a man’s man!” This wasn’t the only hypermasculine statement, but it was the one that pissed me off. I am a carpenter. I don’t do it for a living, and rarely have time to do it as a hobby (for now), but I’ve been building and fixing things that fall under the carpentry umbrella since my very early 20s. You don’t need a penis to be a carpenter! Does this also mean that men who aren’t carpenters are less manly? That’s just ludicrous. He even made a statement about men who’ve been “wussified” and I was like, “That’s the ‘clean’ version of Mark Driscoll a few years ago talking about how men have been ‘pussified’!” That whole series could have been a Driscoll series, and may have been one of his recycled. And Driscoll is another disgraced pastor who has no business on a stage or behind a pulpit.

It was a couple of months after this that there was a guest preacher who gave a standalone sermon to tell parents what they need to do to guarantee their children will follow God. That’s the sermon when it hit me that there was no mention of the Holy Spirit at all, and only a passing mention of Jesus. It was all about doing a set of things “right” so that your kids will turn out all right. But you can do everything “right” and kids will still have a mind and will of their own. Without the Holy Spirit to guide your relationship with them, and without the Holy Spirit guiding them, there is just behavior modification to be accepted by your tribe. The odds are certainly better if you raise them up, but motives matter, and if it’s to make y’all look good and not for them to actually love Jesus and obey Jesus in order to love others, it’s just empty works. There are no absolute guarantees because “Christian formulas” are NOT Jesus.

I stopped listening to the sermon podcasts during that summer’s “Hot & Heavy” series. A story was told, that I have heard told before that I don’t believe actually happened. It’s the reason for following the “Billy Graham rule” because a female congregant tried to seduce him to go to a hotel room she had reserved right across the street from where they were eating as they had met for counseling. I am just as skeptical of that story as I am of Billy Graham’s claim of finding a naked woman in his hotel room. Maybe one of those stories is true. Maybe they both are. But even if so, isolated incidents do not indicate a pattern of women to fall on their backs with their legs up in the air for pastors. It goes right along with patriarchal and complementarian men blaming women for men’s lusts and fantasies while portraying themselves as hapless victims. It makes women enemies just by their very existence. And this is not of Christ no matter how big of a platform they get.

This turned into the long rant that I figured it would. I wrote about magic formulas 3 years ago. I guess once your eyes get opened, you just can’t unsee it. Sheila is right. If obedience to Jesus is not our primary desire in every aspect of our lives, all else will become idolatry and we will chase after and follow anyone who makes us feel better or promises us a comfortable life rather than following Jesus.

This entry is filed under 500 Words, LinkWhoring, Rant, Totally Judging, Where is Jesus in that.

2 Responses to 'Cynical and disillusioned'