This will be one of those list posts because I just haven’t felt like daily serious blogging.

1. I let Petra talk me into taking 3 of her cats. That is the short version because part of the full version of why I took them I refuse to blog about. Anyway, my daughter finally has the black “kitten” (he’s 6 months old now) she tried to get 5 months ago. He is a sweetie, but the other 2 still keep their distance. Poor Spot hates them all, but she hates everybody and everything except me & the hubby. She likes Black Kitty, but for a different reason.

Oh, and Petra still has more cats than me, unless Mittens shows back up and makes us tied. lol

2. I made an appointment with my doc for a physical with the intention of scheduling an OB/Gyn appointment as a follow up. He is very very pleased with my weight loss to date and said “You no longer need to concentrate on weight loss; just work on fitness.” My blood pressure is great, my glucose is fine (which it was before), and my cholesterol is now “phenomenally” good. He agreed with Petra’s diagnosis of gluten intolerance when I explained what all cleared up when I cut out gluten so I suppose that makes the diagnosis official now.

But when I explained that my cycle is still all messed up, he gave me the OB/Gyn exam pretty much on the spot, and is putting me on bc pills for 6 months to try to get everything back in sync. Ugh. But at least that’s out of the way, and I got a bonus rectal exam out of it. MacBros, consider that payback for all the jokes I make about you getting abducted by aliens. LOL I was then scheduled for a mammogram (which I had Tuesday), and I get to have a colonoscopy in a couple of years.

But, anyway, he also checked my knees, and thinks they are fine just to ice them after runs…which does help tremendously.

3. I was blessed with enough additional income to pay off all debt except for the mortgage. My mom told me to buy a car, which I will probably do tomorrow.

4. I’m going to attempt once again to learn how to crochet as soon as the half-marathon is over and I have more time on my hands. Opal and Teeni have inspired me.

5. Speaking of the half-marathon, I am so ready for it to be OVER. I look to Saturdays with dread of that long run. I do enjoy spending time before and after the run with Karyn, but that long run wears me out mentally more than physically. That said, I did my 6 mile midweek run Wednesday and 1) beat my AF 2 mile time (10 seconds is 10 seconds) and 2) beat my fasted 5K time. Only thing I can figure that made the difference in the run was drinking this a few hours prior and still be pinging a little.

6. After showing up for my eye appointment yesterday…2 weeks early…I used the opportunity to hit Angelina’s for some gluten free yumminess. I had seen their posts for the past 24 hours about moussaka, and I was getting some of that. Rather I thought I was going to have me some of that because it wasn’t gluten free. I might have died a little inside.

However, Petra had informed me earlier in the week that I needed to get their gluten free chocolate chess pie and eat it while having alone time. After the bison burger recommendation, I made sure I got some pie because really, who doesn’t like pie? Oh, wait, that would be my daughter. 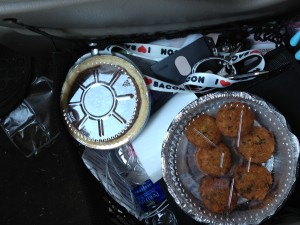 I got falafels instead of the moussaka I wanted so there was still flavor satisfaction. And I took the pie-hating daughter to Harris Teeter for sushi. And yes, I went off by myself and ate half that pie. I’ll be eating the other half in front of my co-workers. Maybe if I’m quiet they won’t notice…

Then Karyn stopped by and dropped off their dolmas they didn’t eat. Seriously, I am like the only one of our group who likes those, and I end up eating everyone else’s. lol I am not ashamed.

7. And because this is AGAIN stuck in my head…