Saturday morning I ran in the CARA-Run For Their Lives 10K. Last year I had intended to attempt the 5K, but then Irene happened and the make up race was on a Sunday. Anyway, I suggested to Karyn that we do this 10k as we train for the half-marathon she talked me into running. We headed over there Saturday morning thinking we had a good idea how the course was going to be. 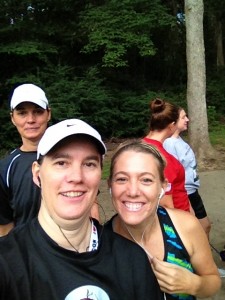 Even my double chin is smiling

See how we are all smiles before we started? Poor Esther has now been accused of being a photobomber. She and another BCRT runner were in the starting line with Karyn and I. I should have been in the very back with the walkers, but whatever. lol The gun went off and we all took off. 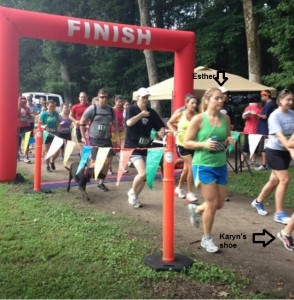 Note that Esther and the lady in the yellow shirt (whose name I cannot recall) are still even with me, and I pointed out Karyn’s shoe and how far ahead she already was. I was not properly prepared for the gun and so I was still starting my music on my iPod. That would be the last I saw of any of those 3 until their final mile. When we headed up into the neighborhood, I realized my folly in not actually driving that part of the route. Hills. Awful hills. When the 5k folks caught up and mingled with us, another Tribe member, Jim, came up behind me as I was groaning uphill and said “Hills are your friend.” I mustered up all of my self-control and didn’t punch him in the ear, and instead just croaked out “NO! They are NOT!” He laughed, told me I was doing great & to keep it up and then virtually disappeared. Ok, he didn’t really run that fast, but he still quickly ran off and left me. I say that like I was alone with a bunch of other runners. haha! I was pretty much following another lady and trying not to let her get too far ahead (especially in the neighborhood). That last neighborhood hill was the one that almost had me puking.

Finally we emerged from the neighborhood maze (and there were enough turns that it felt like a maze), and headed back down to the trail. Now I run the Endor Trail nearly every Tuesday with the BCRT, so I know it like the back of my hand, and it has what several of us have dubbed the worst hill ever in the world. But just one side of the hill, and that was going to be the last big hill before heading back to Kiwanis Park. In my mind I booked it up the Carbonton side. Coming back from Spring Lane was going to be bad, and I knew it because it ALWAYS kills me. But it didn’t. Weird.

Finally, though, I was back in the park headed to the finish line. Click to embiggen because it’s thumbnail size or full for this photo for some reason. 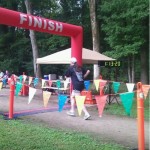 Karyn was waiting on me and snapped that as I was crossing the finish line. This is one of the few times I’m glad it was a rear shot because I know my face was contorted in pain. My chip time was 1:13:12 and gun time 1:13:21 with a pace of 11:50. Not my fastest run, but I am happy with anything under 12. Esther placed 2nd in our age group, and I wasn’t last.

Karyn placed 5th in her age group. It was hard to get around Sunday, especially anything that involved bending my knees with my full weight. It still hurts to walk downstairs today, and I cannot say I am looking forward to tonight’s run.