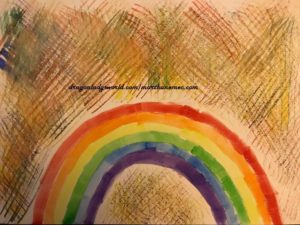 Topic 1 of This Series

This topic was at the bottom of my list. I was also what I was originally working up to with Love your neighbor but news of Ahmaud Arbery’s, Breonna Taylor’s, and George Floyd’s murders were more urgent to address loving our neighbors. Now that it’s Pride Month, it seems like the time for the topic of changing my mind about LGBTQIA.

It all began with Sodom and Gomorrah. All my life I was taught they were destroyed because of homosexuality. I just accepted that as fact because I didn’t believe the churches I attended would teach something false. After all, Landmarkism was developed precisely to refute wrong doctrine. (That’s a post that I’ve probably written at some point.) Hence, I believed the Procter and Gamble connection to Satanism when I heard it taught at church. (It was not true.) But the backward masking scare tripped my bullshit detector despite only being about 13 years old. (My intuition correctly detected it was bullshit.) That was the first crack in my “church is always right” (as long as it’s a Landmark Missionary Baptist) wall.

Still I believed what I had been taught about Sodom and Gomorrah because “the Bible is clear.” The story is clear, but it says something a bit different from the narrative I was taught. (Read the story, Genesis 18:16 – 19:29) Sodom wasn’t “full of gay men;” it was full of greedy rapists. Throughout the rest of the Old Testament when Sodom is mentioned with the reasons for its destruction it was not over sex. It was the wealth the city didn’t share with the poor and lack of hospitality. (Ezekiel 16:49)

All the teaching that LGBTQIA+ people in this country would cause our destruction is based on a false interpretation. “Teh gays” represent no threat to the nation. I felt duped even though part of the problem was that I didn’t read the passage myself for most of my life. The crack in the wall grew bigger.

I continued believing for a while that it was a major and damning sin because my indoctrination has deep roots. However, I was no longer “hostile” toward it. I had to many gay friends and family to ever wish harm to anyone. Eventually I reached a point where I was no longer confident that the Bible was “clear” about it.* As it turns out, there is missing context for what was likely being portrayed in the Law given to Israel after they were led out of Egypt.

God’s people, Israel, were set apart by God and were instructed in the Law how to look and act differently from the other nations who worshipped other gods. (Leviticus 18:3) Part of that had to do with sex. (Leviticus 18) The surrounding nations had fertility gods and were believed to have sexual rituals associated with the temples to and worship of those gods. As I wrote in Love your neighbor, “All of the laws about loving our neighbor either seek to prevent harming them, or provide justice to those who have been harmed. Even the commands to love God provide protection and justice to others because idol worship always leads to oppression.” Lesbian sex was not mentioned in the law though sex with animals was prohibited for men and women. The author of Diary of an Autodidact explains the meaning of the word translated “sexual immorality”:

First, the word translated “sexual immorality” is porneia, which has an…interesting history. The word is thrown around a LOT in the Septuagint, the Greek translation of the Hebrew Old Testament. Porneia is used primarily to describe idolatry or selling oneself to another god. (The root of the word combines “sex” and “transaction,” that is “prostitution.”) So the Israelites seemed to be continually committing “porneia” with other gods. Esau committed “porneia” when he sold his birthright. (How crazy is that?) Christianity, particularly starting with patriarchal church fathers like Augustine, decided that “porneia” really meant sex outside of marriage, which is…not its clear meaning. To the Greeks and Romans, porneia had become an idiomatic way to refer to “acceptable” extra-marital sex – namely, men sleeping with prostitutes or raping their slaves. (There was a different word, moicheia, to refer to adultery – that is, a man messing with another (free)man’s chattel.) This could be an entire rabbit hole here, but suffice it to say that the cultural baggage of the Greco-roman world combined with the cultural baggage of Second Temple Judaism to create a whole doctrine that is rather foreign to the Torah or to the culture the bible was written in.

It does not appear that consensual sex was what the Bible writers were portraying as sin. I’m not saying I think it’s okay for us to go out and sleep around with whoever we want. I just don’t see how consensual sex between 2 people in a romantic relationship with one another is the abomination God was referring to – gay or straight – and certainly not marriage. He is much more concerned with oppression.

*I’m not saying the Bible is not inerrant. I’m saying neither translation nor interpretation are inerrant.

3 Responses to 'A little respect'